I enjoyed myself at the gig last night. For a start, it was pleasant to see Tim (former flatmate and generally good egg) for the first time in a few months, and also Alexis (former university friend who got in touch with me via Facebook a couple of years back, which was a very pleasant surprise!). For another thing, yeah, just some great music. Dubstar started out with their cover version of I'm in love with a German film star, and then it was on to a selection of stuff off Disgraceful (at one point Sarah Blackwood announced, "it's back to 1996 for the next one," and got some applause and cheers; I wonder how many other people are in the same position as me, only properly knowing that first album..?), some that I vaguely recognised from my earlier-in-the-day listen of Goodbye (during Ghost, Sarah broke down in tears while singing...must confess, I don't know the story behind the song, but, yeah...powerful stuff), a b-side, and a couple of new songs, finishing with essentially a dub version of Disgraceful (the song) (yes, we see what you did there...)

Sarah was stunningly modest throughout. It seemed that she was rather nervous at first, but after the first couple of songs, and very loud applause and cheering from the audience, she got very much into her element. Face it - we all adored them, and I think that gave them, or her in particular, a lot of confidence. On Not so manic now a large chunk of the audience sang along enthusiastically, after which Sarah said, "you sound fabulous." I pointed out, "so do you!" "Oh, bless you!" she replied. :-) And she thanked the audience on many occasions. Tch. She and Chris and Steve were the ones putting on an entertaining show - we were just standing there and enjoying the show. :-)

Afterwards, I noticed that Chris was on the stage putting away his stuff and that some of the audience were going up to him and chatting and getting photos and autographs, so I walked in that direction, and realised that Sarah was at the front of the stage doing the same, so I managed to get my copy of Disgraceful signed (the original version, with the slightly dubious front cover picture), to say a few words, and also to have a picture taken with her. Which was lovely. Sadly, by this point Chris had disappeared into the ether, and there was no sign of Steve, but even so, that was very much the icing on the cake.

And a video (not from last night, but hey, who's complaining..?)

The interview has happened. I think it went okay. It's a long time since I was last interviewed for a job (10 years, indeed). Some of the questions were a bit...interesting - "can you think of an example where you've gone above and beyond the call of duty to help a colleague or patient?" for example. Erm...no. I tend to do the job, and then go home and forget it. So I ended up having to be a bit non-specific there. Apart from that it was okay, the interviewers were friendly, I hope I asked some intelligent questions, and they reckon I should hear by the end of today either way.

I still genuinely don't know whether I want to continue being employed here, or to just get made redundant. Point in favour of the former: continued job security, and, even though, it's down a couple of of pay grades from where I'm at right now, we're guaranteed pay protection for at least the first three years. Points in favour of the latter: 10 months tax free redundancy pay, not having to commute nearly two hours each day (more if the traffic's bad), and the possibility of starting my own business. Genuinely divided. I think I'll just take life as it comes...

The future lies this way.

Posted via LiveJournal app for iPhone.

...just found this photo of me & Sarah, taken when we were on holiday in Thailand back in 2007/8. Pity the picture's got a bit of dirt on it, but apart from that it's quite nice. 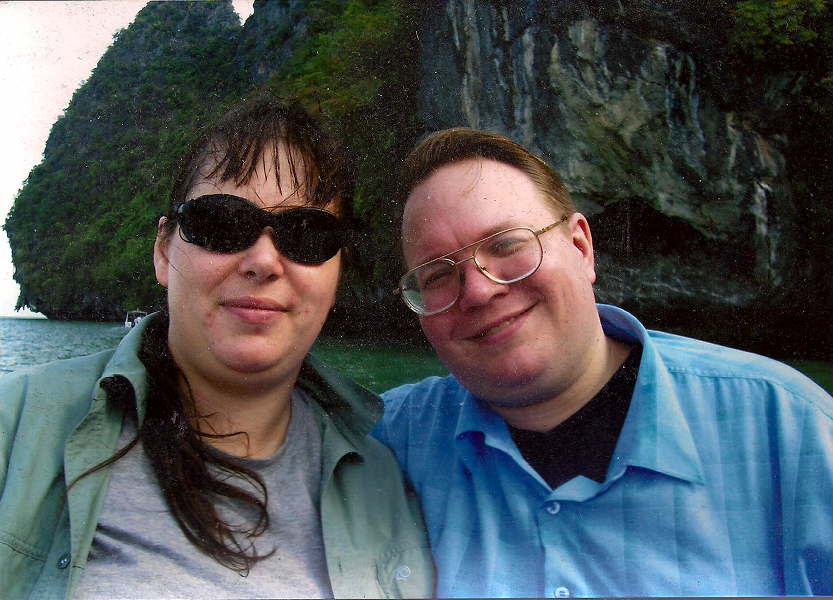